LOS ANGELES, CA—The Skirball Cultural Center proudly announces the lineup for its twenty-fifth anniversary season of the free summer concert series Sunset Concerts. After virtual 2020 performances and an abridged 2021 season, this year marks a return to the full six-concert schedule and will feature both path-makers and bridge-builders from around the globe and here in Los Angeles. Presented since 1997 in the Skirball’s idyllic hillside courtyard, Sunset Concerts—sponsored by the Bilger Family—draws music fans of all ages from across greater LA and beyond.

“Music gives us a common language to connect across generations and cultures,” comments Jessie Kornberg, Skirball President and CEO. “The Sunset Concerts series typifies that inherent opportunity for connection by presenting diverse and distinct musical traditions. These nights give concertgoers a chance to live what we feel is a Jewish commitment to welcome the stranger, literally through the gathering of community, and more broadly through the sharing of these expressions of history and identity.”

“For our twenty-fifth anniversary season, we wanted to bring an international lineup of artists, some of whom have graced our stages before and others who are making their Sunset Concerts debut,” says Jen Maxcy, Director of Programs. “All of the performers for this landmark season are groundbreakers and community builders, representing our goal to gather diverse cultures through the power of music.”

To expand the celebration of this milestone season of Sunset Concerts, the Skirball will be releasing the second season of Skirball Stages—a series of online concert films that give audiences a chance to experience last summer’s Sunset Concerts performances and watch exclusive behind-the-scenes interviews. Each Skirball Stages episode premieres at 8:00 pm on the Skirball’s YouTube channel as follows: Run River North (June 1); The Delirians (June 22); Extra Ancestral (July 13); and Quetzal (August 3).

The 2022 Sunset Concerts are presented free of charge, and an RSVP is required. RSVPs will open on June 9 at noon.

Visitors are encouraged to arrive early to eat, drink, shop, and enjoy complimentary admission to the exhibitions, beginning at 6:30 pm.

Currently on view are the exhibitions “I’ll Have What She’s Having”: The Jewish Deli and Talking Back to Power: Projects by Aram Han Sifuentes. Both exhibitions are on view through September 4 and will remain open on Sunset Concerts evenings until 10:00 pm.

In honor of “I’ll Have What She’s Having”: The Jewish Deli, special menu items including hot pastrami and corned beef sandwiches, rugelach, and black and white cookies will be available for purchase, along with a full bar, until 8:00 pm in the Founders Courtyard. Bar service and light snacks will also be available in the Taper Courtyard, where the concerts take place, until 10:00 pm. Guests may bring their own food, but no outside alcoholic beverages or chairs are permitted.

Audrey’s Museum Store will be open until 8:00 pm, offering merchandise inspired by the Skirball’s mission, values, and programming.

Parking will be available on-site at the Skirball for $20 upon arrival or $15 if reserved in advance. Skirball Members can prepay online for only $5. Street parking is strictly prohibited.

“A seeker of truth, beauty and peace through music.”—LA Weekly

The Skirball welcomes back Iranian American singer Mamak Khadem to kick off the twenty-fifth Sunset Concerts season. Khadem’s striking blend of classical Persian style and diverse contemporary influences traverses musical traditions from Iran to Eastern Europe to the Mediterranean in search of shared humanity. Khadem will present songs from her latest album Remembrance with a hybrid ensemble under the music direction of cellist and composer Chris Votek combining the Western string quartet with traditional Persian instruments.

Concertgoers have the opportunity to attend an intimate pre-concert presentation from 6:45 to 7:15 pm with Khadem herself, Rumi scholar and author Omid Arabian, and celebrated Iranian filmmaker Sam Javadi, who directed three music videos from Khadem’s new album, Remembrance.

“Dawuni spreads positivity through his music and actions.”—KCRW

Musician and activist Rocky Dawuni—who calls both Los Angeles and Ghana home—has become a local favorite for his infectious, feel-good reggae tunes and globe-spanning “Afro roots” sound. Dawuni has shared stages with Stevie Wonder, Peter Gabriel, and John Legend, and in 2022 he received a Grammy nomination for Best Global Music Album. Through his music and advocacy, he fights for climate justice, champions social causes, and unites generations and cultures.

Through klezmer melodies and Hebrew refrains, the boundary-pushing bluegrass Americana band Nefesh Mountain shares the beauty of Jewish culture with the world.

Their most recent album, Songs for the Sparrows, was inspired by a life-changing trip to Poland and Ukraine, where band leaders Doni Zasloff and Eric Lindberg’s families emigrated from. Exploring a range of experiences from an Eastern European Jewish perspective, Nefesh Mountain uses music to tell stories of humanity with what has been called “old soul wisdom.”

“One of the legends of soul music.”—The New Yorker

Groundbreaking soul and R&B artist Booker T. Jones occupies an important place in the history of American music. At seventeen, he fronted the seminal Memphis soul band Booker T. and the M.G.’s—a rare integrated group of musicians that served as the house band for Stax Records, working with the likes of Otis Redding, Bill Withers, and Wilson Pickett. Jones will lead the audience through a “Stax Revue” of iconic songs at the Skirball that illuminate an extraordinary career spanning almost sixty years.

“WOW … A most astonishing show musically and immensely entertaining.”—NPR Music

Impressing audiences with their “candy-colored costumes and bouncy, upbeat, often swinging songs” (New York Times), South Korea–based ensemble Ak Dan Gwang Chil (ADG7) connects shamanic ritual music and beloved folk songs of the Hwanghae region to the contemporary sounds and influences of pop. In 2020, ADG7 was a featured artist in the Skirball’s virtual concert series, Skirball Stages, which can be viewed on the Skirball’s YouTube channel.

As part of this very special evening, the Skirball is pleased to welcome the Korean Cultural Center Los Angeles, along with Skirball exhibiting artist Aram Han Sifuentes, who will perform with the Korean American drumming group Woori Sori.

Founding Son Rompe Pera members Kacho, Kilos, and Mongo Gama add their own grunge and rock sensibility to the marimba they first played alongside their father while growing up in the deep outskirts of Mexico City.

While firmly rooted in the tradition of this historic instrument, the Gama siblings bring a punk-rock edge to classic cumbia rhythms. “Cumbia is like punk,” Mongo Gama explains. “It’s barrio, it’s of the working class, it’s of the people who have dreams.”

Special menu items, light fare, and full bar service will be available for purchase. Guests may bring their own food. Note: No outside alcoholic beverages or chairs are permitted.

Sunset Concerts at the Skirball are generously sponsored by:

The 2022 Sunset Concerts season is made possible in part by additional support from:

About Sunset Concerts at the Skirball

Marking its twenty-fifth season in 2022, the longstanding summer concert series kicked off just a year after the Skirball Cultural Center opened to the public in 1996. During that inaugural year, the institution drew nearly 300,000 visitors, far surpassing an initial expectation of 60,000. In winter/spring 1997, seeking to build upon this early success, the Skirball began to hold monthly dinnertime concerts inside its restaurant, Zeidler’s Café. The concerts were so well attended that the team quickly rethought the event space. The following summer, upon popular demand, the Skirball launched a free four-concert series on Thursday nights. These performances took place in the Skirball’s much more spacious central courtyard, offering a view of the hillside at dusk. The series was soon named Sunset Concerts at the Skirball. For several seasons in those early years, along with Grand Performances downtown and Santa Monica Pier’s Twilight Concerts, Sunset Concerts represented one of the city’s few free outdoor summer music series. Noteworthy Sunset Concerts performers over the years have included Lila Downs, Sierra Leone’s Refugee All Stars (US debut tour), Bassekou Kouyate, Yasmin Levy (US debut), Hugh Masekela, Vieux Farka Touré (LA debut), Natacha Atlas, Red Baraat, Conjunto Chappotín y Sus Estrellas (US debut tour), Thao & The Get Down Stay Down, Novalima, Daymé Arocena, Goapele, Kishi Bashi, The Marías, The Klezmatics, Gaby Moreno, and Quetzal.

The Skirball is located at 2701 N. Sepulveda Blvd., Los Angeles, CA 90049. Museum hours: Tuesday–Friday, 12:00–5:00 pm; Saturday–Sunday, 10:00 am–5:00 pm; closed Mondays and holidays. Admission to “I’ll Have What She’s Having”: The Jewish Deli and Talking Back to Power: Projects by Aram Han Sifuentes and most exhibitions: $18 General; $15 Seniors, Full-Time Students, and Children over 12; $13 Children 2–12. Noah’s Ark is ticketed separately. Exhibitions are always free to Skirball Members and Children under 2. Advance timed-entry reservations are required. For general information, the public may call (310) 440-4500 or visit skirball.org.

END_OF_DOCUMENT_TOKEN_TO_BE_REPLACED 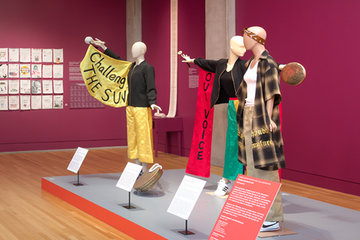 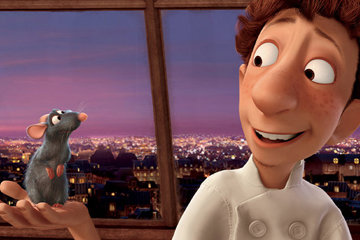 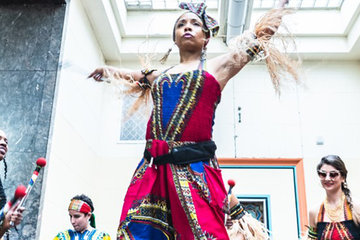 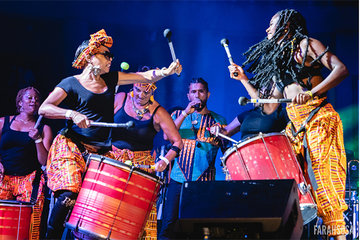 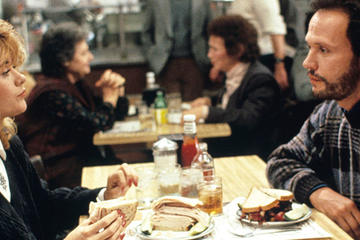 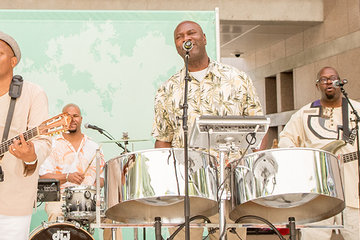 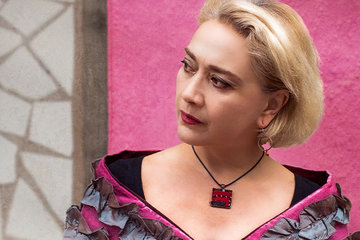 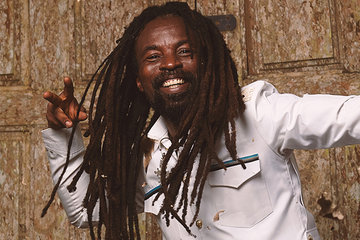