Skirball Cultural Center reveals details of the West Coast debut of Fabric of a Nation: American Quilt Stories from the Museum of Fine Arts, Boston as well as the complementary interactive exhibition Together for Good: Caron Tabb and the Quilting Corner

Works in Fabric of a Nation: American Quilt Stories from the Museum
of Fine Arts, Boston include the Ellis Island quilt from the Skirball’s collection, as well as pieces from Sanford Biggers and Los Angeles–based artists Sula Bermúdez-Silverman and Sabrina Gschwandtner

LOS ANGELES, CA—The Skirball Cultural Center announces today additional details of the West Coast debut of the critically acclaimed exhibition Fabric of a Nation: American Quilt Stories from the Museum of Fine Arts, Boston, including seven additional works and four newly recorded oral histories as part of the exhibition audio guide. Spanning five centuries and including nearly fifty textiles, this landmark exhibition celebrates the artistry and vision of a diverse and, in some instances, under-recognized group of creators, and brings to light stories that enrich, deepen, and complicate our understanding of the American experience. The Skirball’s presentation will feature newly displayed works by Sanford Biggers and Los Angeles–based artists Sula Bermúdez-Silverman, Sabrina Gschwandtner, Joel Otterson, and Ramsess, as well as a moving quilt from its own collection, Ellis Island, which highlights the Ashkenazi Jewish immigrant experience. In the new interactive exhibition Together for Good: Caron Tabb and the Quilting Corner, Caron Tabb’s dramatic work Fabric of Humanity – Repairing My World (2020–present) will be displayed alongside an all-ages community quilt-making activity inspired by Tabb’s work, the result of which will be accessioned into the Skirball’s collection. Tabb’s work and the Quilting Corner are born out of modern-day interpretations of tikkun olam (Hebrew for “repair of the world”), a Jewish concept grounded in social justice and goodwill, touching on the beauty and strength of community. Both exhibitions open November 17, 2022, and run through March 12, 2023.

The quilts on view in Fabric of a Nation: American Quilt Stories from the Museum of Fine Arts, Boston were created by women and men, known individuals such as Bisa Butler and Harriet Powers and those yet to be identified, urban and rural makers, and members of Black, Latinx, Indigenous, Jewish, Asian American, and LGBTQIA+ communities. Many of the older quilts survived because of their importance to families, the emotions they evoked in those owners, and the stories that were passed down with them. That they still exist is also a tribute to the people, many of them women of color, who helped make and care for these precious objects.

The exhibition explores how quilts have evolved alongside the nation. As the country has changed, so too has the purpose and meaning of quilts. Early on, quilts, as well as woven blankets, were appreciated for their warmth and artistry as decorative bedcovers. By the mid-nineteenth century, quilts were displayed in fairs and other public places, and some makers began to see themselves as textile artists. Today, quilters have expanded the medium to encompass a wide range of techniques, materials, and imagery. Some contemporary artists have used the quilt form to bring attention to social justice issues and to address difficult moments from the nation’s past and present. The works in this exhibition capture the unique capacity quilts have to tell stories and convey a sense of humanity.

“Whether it is through deli sandwiches or Muppets, at the Skirball Cultural Center, we are committed to sharing the individual and collective stories of the American experience,” remarked Jessie Kornberg, Skirball Cultural Center President and CEO. “We are motivated to amplify these stories because we see the countless points of connection and resonance people feel when they bear witness to them. Both of these exhibitions highlight quilts, a quintessentially American form, to express the most personal and nuanced points of view of their makers, while also telling a broader story of community, healing, and what it is to be American.”

The exhibition is organized thematically into seven sections. The introductory section titled Who/What Is American? invites visitors to explore these open-ended questions through six quilts that span 150 years. Among these are the Vote quilt (1975) made in Gee’s Bend, Alabama, by Irene Williams (1920–2015), which is shown alongside two other works that evoke the US flag, and To God and Truth (2019), the largest and most ambitious work to date by contemporary artist Bisa Butler (b. 1973). For the Skirball’s presentation, a quilt from its collection, Ellis Island (1996), which was acquired by the institution and has been on view in its core exhibition, Visions and Values: Jewish Life from Antiquity to America, speaks to immigrant experience, particularly the experience of Central and Eastern European Jewish immigrants who came through Ellis Island, and was created by the Hamish Amish Quilters.

Set within the context of the global textile trade between the American colonies and the expanding empires of Spain and Great Britain, the quilts on view in the second section, Unseen Hands, honor the contributions of the individuals—many of them enslaved—who contributed to the creation of the works themselves, or the cultivation of the materials used to make them. In addition to quilts that were treasured by prosperous white Americans in the eighteenth century, this section features contemporary pieces by Tomie Nagano (b. 1950) and Rowland Ricketts (b. 1971), which explore the history of indigo production.

The works on view in the section titled Crafting a Nation fall into a period of growth, when, following the Revolutionary War (1775–1783), the US expanded its territory from the Atlantic Ocean to the Pacific. During this time, emerging urban centers, such as Baltimore, offered new roles for women who used their domestic skills to supplement household incomes by designing and stitching quilt blocks or weaving. Of course, this period of increasing prosperity for white, European settlers in this new republic came at the expense of the enslaved African Americans who were forced to work plantation fields as the demand for cotton grew and the Native Americans and Hispanic settlers who were killed, displaced, and subjugated by westward expansion.

The fourth section, Conflict Without Resolution, features seven pieces that explore the Civil War (1861–1865) and its aftermath and legacy—from the Jim Crow era to the Civil Rights Movement to the recent protests for Black Lives Matter. Large-scale works on view include Civil War Zouave quilt (probably mid- to late-1860s), made in part from Union troops’ uniform cloth, which illustrates General Ulysses S. Grant leading a charge on the Confederate city of Vicksburg, Mississippi. This is juxtaposed with a more recent quilt, Michael Thorpe’s Untitled (2020), which was made in reaction to the killing of George Floyd, evoking ongoing calls for racial justice in the US.

The section titled Quilts as Art celebrates the evolution of quilts into a celebrated national artform, highlighting the achievements of Harriet Powers (1837–1910) and other quilters whose names have been lost. These extraordinary quilts were created not for the home, but for the walls of county, state, and even international fairs.

America saw tremendous changes in the early twentieth century, and yet quilts and coverlets continued to hold their place in people’s hearts and homes. The sixth section, Modern Myths, features dazzling examples of what have come to symbolize American virtue and resourcefulness from the Great Depression (1929–1933) through the early period following World War II (1939–1945). These include quilts from Gee’s Bend, Alabama, where African American women such as Rachel Carey George (1908–2011) and Creola Bennett Pettway (1927–2015) created powerfully imaginative bedcovers that transcended utility, and a quilt on loan from the National Japanese American Historical Society in San Francisco that was made by Japanese American fourth graders at an American concentration camp in Poston, Arizona.

Works on view in the final section, Making a Difference, explore how the medium has been continually rediscovered by new generations who have used it for artistic expression, social protest, or remembrance. The section begins in the 1970s with quilts by young artists who challenged hierarchies within the art world, including childhood friends Susan Hoffman (b. 1953) and Molly Upton (1953–1977), who shared a studio in Cambridge, Mass. The exhibition concludes with the work of contemporary artists—including Sabrina Gschwandtner (b. 1977), Sula Bermúdez-Silverman (b. 1993), and Joel Otterson (b. 1959)—who are applying unique techniques to the artform while working within the themes of representation and identity.

"At the Skirball, our mission is to create cultural experiences that help build a more inclusive, welcoming society. In that context we are delighted to present Fabric of a Nation: American Quilt Stories and the interactive companion exhibition, Together for Good: Caron Tabb and the Quilting Corner. We see quilts as embodying the strength and beauty of coming together across differences—something that feels especially relevant in our fractured world. Our hope is that these exhibitions serve as springboards for visitors to connect with one another as well as with the incredible works on view," said Sheri Bernstein, Skirball Museum Director.

In Together for Good: Caron Tabb and the Quilting Corner, artist Caron Tabb’s striking large-scale quilt, Fabric of Humanity – Repairing My World, attests to the power of art making, storytelling, and creative vision to affirm humanity’s innate interconnectedness. An artist who incorporates her Jewish cultural heritage into her practice, Tabb created the artwork in response to the ongoing pandemic and her associated feelings with hopelessness and isolation. The work is composed of materials that she collected from individuals around the world and assembled into a cohesive piece, underscoring the power of individuals connecting to create something meaningful. The quilt will also be exhibited with statements from fifteen contributors to the work, who describe meaning and intention behind the pieces and elements they provided. The Skirball will invite visitors to observe Tabb’s piece and then work together to create their own component of a new Skirball quilt, illustrating collective hopes, reflections, and intentions. The quilting will be facilitated by professional artisans from the African American Quilters of Los Angeles and the Los Angeles Modern Quilt Guild. As the Skirball quilt grows over time, it will be an embodiment of shared experiences, unique perspectives, and the value of coming together.

These exhibitions and their related educational programs at the Skirball Cultural Center are made possible by generous support from the following donors:

Ticketing for the Fall Exhibitions

END_OF_DOCUMENT_TOKEN_TO_BE_REPLACED 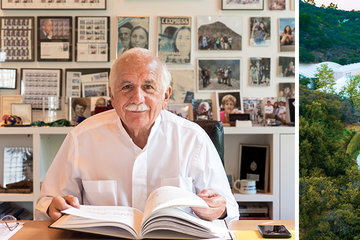 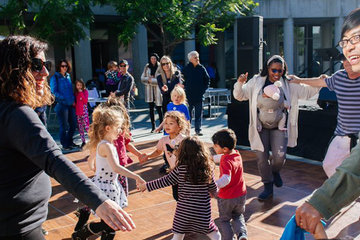 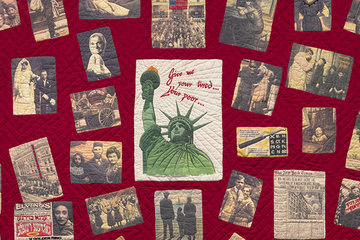 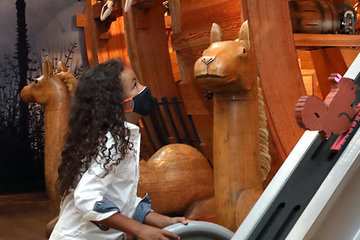 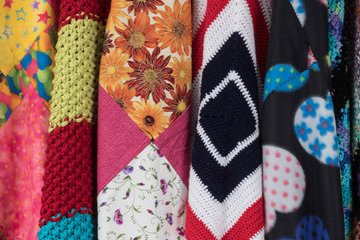